A Volpino Italiano is a spitz-type breed of dog originally from Italy.

The Volpino Italiano is a direct descendent of Spitz-type dogs, which records show existed over 5,000 years ago. After breaking away from the Spitz breed, the Volpino Italiano became very popular in ancient Italy. This dog breed was said to be a favorite among palace lords as well as farmers, and is even rumored to be the dog of Michelangelo. For reasons unknown, the Volpino Italiano neared extinction and in 1965 only five of the dog breed were known to exist. After about twenty years, a discovery project was formed to recover the breed using the existing dogs from farms. Today, the Volpino Italiano dog breed still exists in small numbers and was recognized by the United Kennel Club in 2006. 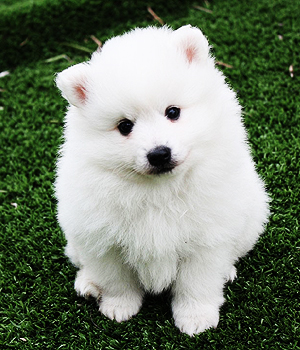 Squarely built. The chest is deep to the elbow, and the ribs are well sprung. The withers are slightly high. The topline is straight to the loin, where it is slightly convex. The croup is very slightly sloping. There is a slight tuck up and moderate hollowing at the flanks.

The basic well being and health of the Volpino Italiano breed is far better than with most dogs. However they are not immune to genetic and other diseases. At this point in time (Mid 2013) The greatest threat facing this race is the genetic mutation of the eye lens called Primary Lens Luxation (PLL). This is an extremely painful disease that manifests itself when the Zonal cords holding the lens in place ‘weakens’ and breaks’ at a genetically pre determined time (usually about 4 to 8 years old. Once the Zonal cords breaks the lens begins to move in to the interior of the eye increasing the pressure in the eye and causing the animal great pain. Because of the expense in removing the lens or the eyes the animal is usually euthanized.

The Volpino makes a good watchdog, and some can even be used as gun-dogs (bird dogs) if trained properly. They will make extremely active, affectionate pets.

Although the Volpino Italiano closely resembles a Pomeranian, the two breeds bare no relation. This dog is known for its thick, soft coat that comes in a sold white, red, or champagne color. The Volpino Italiano weighs about 9 to 12 pounds at an average height of 11 inches. 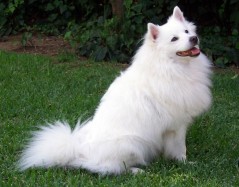